But life has just gotten in my way.

It has been such a busy month.  We spent 2 weeks at my son's watching the house and the cat and dog.  We had a good time but I was getting home sick.  Missed my sewing room too.  But enough of that.

A few weeks ago, Freda at The Adventures of the Empress of the Universe had a giveaway.  She made some adorable stilettos from a Turkey Skewer and some beads.  I entered but alas did not win.  Then much to my surprise I got a package in the mail from her.  She sent me the one I loved. 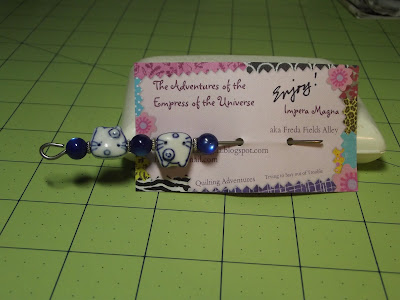 Isn't it adorable.  My nickname is Cat so of course I loved it.  I thanked her in private but I just had to thank her publicly too.  Freda I love it and have used it a lot.

I finished my the quilt top for my fourth Quiltmaker Scrap Squad Quilt.  Now I need to sandwich it and start had quilting it.  I can't wait for you to see it.  Quiltmaker has been so fantastic and have let us do a little designing of our own on this one.

I do have a few things on my design wall to show you.  I trimmed all the blocks from the New Bee Swap at 15 minutes play. 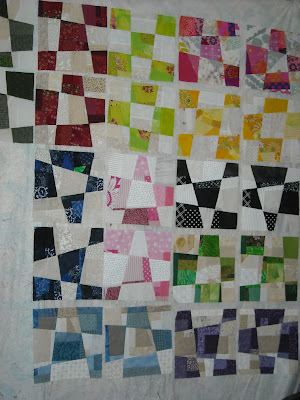 Now I need to mix up the blocks and add the sashing.

The second is an long on going project.  I pull it out and make a few blocks when I have some spare time. 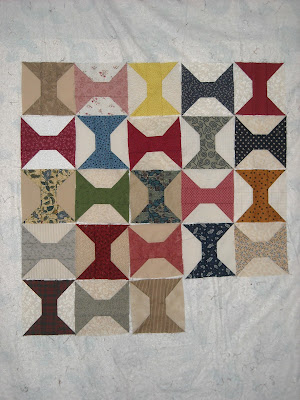 I love making these little spools.  So easy and I have made them with nothing but scraps.  They are 5" square.

Tuesday I had out patient surgery to remove a lump on my left jaw.  45 minutes later the lump was gone and I have a nice 2" incision.  The lump was a cyst and was the size of a golf ball.  I'm so glad it is gone.  And the incision is healing nicely.

We've recently been looking at travel trailers.  Before I moved up north to take care of Dad in 2006, Terry and I did a lot of traveling and camping.  We had an extremely large pop-up.  We used it so much....it fell apart.  Now that Terry is retired we have been dreaming of camping and traveling again.  Yesterday we bought a new trailer.  Yay...  It is 26' long, has a queen bed, dinette, couch, complete bathroom, freezer, fridge, 3 burner stove top, oven, microwave oven, double sink and lots of storage.  (I already found the spot for my sewing machine, fabric and supplies..lol..)  We pick it up next Wednesday.  We will do a little camping close by to get used to it and then.....
We will be going to Assateague Island in Maryland for a couple of weeks in October.  I can't wait.   Prior to 2006 we would go for a week every October.  We have really missed it.  I will keep you informed.

Have a great holiday weekend.

PS:  Stay tuned...I'm going to have a giveaway in the next week or so.

Well we're on vacation again.  Back to the Upper Peninsula.  This time we are house sitting for my son and watching his pets.  We've been here a week and and have enjoyed some beautiful weather.  That is until today.  Thunderstorms have been rolling though this morning at an alarming rate.  But they do need the rain. 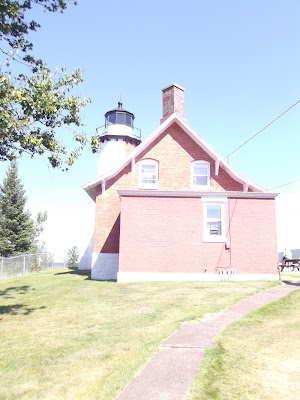 We have made a few day trips.  We went up to Copper Harbor.  And visited Eagle Harbor Light House.  It was a beautiful day but windy. 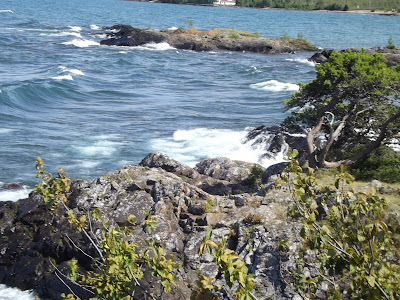 The shoreline is quite rocky. 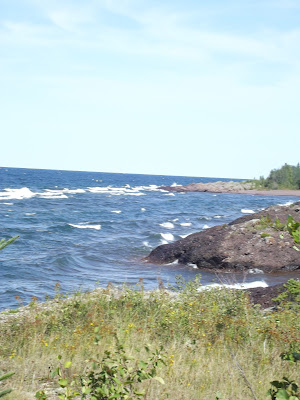 And it is really beautiful there.

As much as I enjoy it here I am getting a bit homesick.  I miss my sewing machine and all my fabric.  I brought some hand work but it's not the same.

We will be here about 5 more days and then we will be homeward bound.  I hope to have something quilty to share then.

Wishing you a wonderful quilty day.

Cathy
I'm a quilter whose passion has taken over her life.... 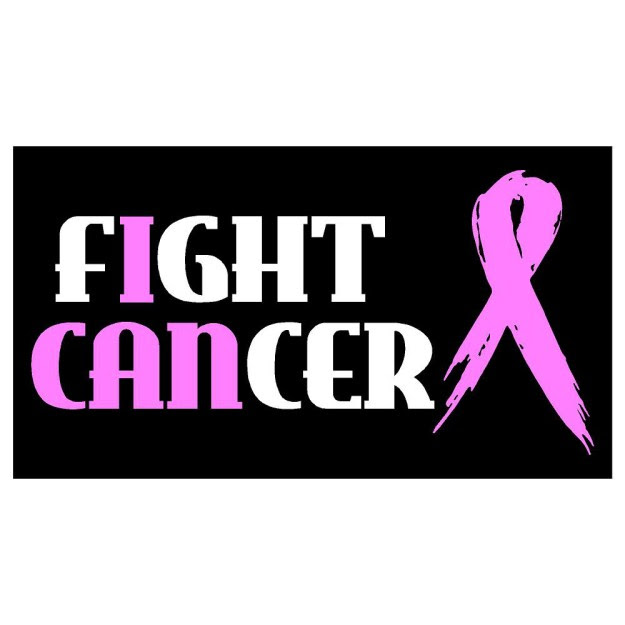